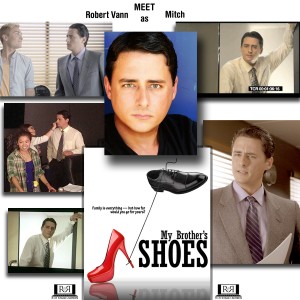 We are pleased to introduce you to Robert Vann who is playing the role of Mitch. Mitch is a junior partner at the office where Dallas Trent (the main character in our film) works.

We asked Robert some questions in order to get a little more inside of who he is and how he prepped for the role of Mitch.

Q: What do you find about acting – and especially film acting – that has made you pursue this crazy art – even if this is a first for you?
A: I honestly had no plans to pursue film. I am grateful for your asking me to participate in this project and it was a wonderful education for me. As one who had worked exclusively as a stage singer/actor before My Brother’s Shoes, this project pushed me out of my comfort zone in several ways. One notable example is when you deliver a stage performance, you start at the beginning and deliver the narrative in the same order that the audience experiences it. When I arrived on set, I found it fascinating that we would not only film scenes out of sequence, but film a scene, and come back to that scene from a different camera perspective later on in the filming process. Also, when you perform a stage work you are constantly revising and tweaking your interpretation of a part. When filming a movie there is no revising and you better make sure that your choices are consistent with your other scenes. Of course, these are all obvious to one who has worked on film before, but for me it was quite an education.

Q: When presented with a character to play, obviously you have never encountered this specific character that only now exists in the script you have been given. How do you bring the character to life and create a believable person from nothing?
A: I always try to make a personal connection with a new character by relating their experiences with some of my own. In the case of Mitch (an office worker in his thirties) this was not very difficult. There is nothing in the script about his past or any relationships/experiences outside of his office environment, so I had a lot of freedom.

Q: Do you enjoy seeing yourself on the big screen?
A: Great question. We will see (HA!). I have watched many of my stage opera/operetta performances that have been filmed from an audience perspective. I usually end up critiquing my singing more than anything. I have never had a camera so close to my face during a performance, so I honestly do not know whether I will like it or not. Either way, I really enjoyed the on-set experience.

Q: Independent films are shot very quickly and sometimes things you wish you could have (more rehearsal time, your own dressing room with a star on it, more input on the set, etc.) are not an option. What do you wish you could have had in this film? And what keeps you doing independent films?
A: I would have liked to have made it to the first table read of the script. I think it would have allowed me a chance to experience the script as a narrative in a manner more relatable to my stage experience. Unfortunately I had a conflict that prevented me from being there.

Q: When playing a character, some actors create a whole back story in order to give them a full life. Tell us something about your character that is NOT in the script that made you feel more in touch with them on a personal level.
A: Mitch is an opportunist. I have had a few commission sales jobs, and you learn really quick that even your office friends are opponents. There can be only one top producer and you are only as good as your last month’s numbers. Mitch is Dallas’ friend but you had better believe that he would not hesitate to seize an opportunity at Dallas’ job. It is not personal, it’s just business.

Q: After auditioning, how did you feel when you heard you got the part?
A: I was certainly excited, and a bit nervous. I have never done anything like this before. I also approached this project with very little ego. I was there to learn and give what I could.

Q: Family and friends will see the film because you are in it. What is it about the story of the film that would motivate you to tell others they “must” see it?
A: This is a movie about family. It is a funny film that is simultaneously culturally-relevant and timeless. All of us have been guilty of judging others based on our own perspectives and experiences. This film reminds us that “You can’t really understand another person’s experience until you’ve walked a mile in their shoes.”

Q: Any final comments or thoughts?
A: Adam Reeves did an awesome job in directing and writing the script for this film. Get your tickets! You will want to see this film!

Robert Vann, tenor, enjoys an active vocal solo career throughout Northern California. Concert performance highlights include solos in Carmina Burana with Sacramento Ballet, The Coffee Cantata with the California Baroque Ensemble and Bach’s Cantata No. 61 with the Apollo Symphony & Chorus.

Robert has been described as possessing “an effortless, beautiful tenor” by Janos Gereben of the San Francisco Classical Voice. Opera News called his portrayal of Hilarion in Princess Ida with Lamplighters Music Theatre “Impassioned”. A performer with nearly twenty stage roles to his credit, recent opera/musical theater engagements include the role of Alfredo in Verdi’s La Traviata and Pollione in Bellini’s Norma (both with Pocket Opera of San Francisco), Almaviva in Il Barbiere di Seviglia with California Opera and has performed most of the tenor leads in the Gilbert & Sullivan canon with the Lamplighters of San Francisco and Light Opera Theatre of Sacramento.

He resides in Sacramento, CA with his wife, soprano Carley Neill.