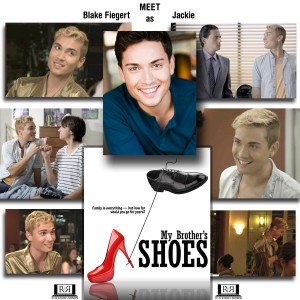 We are pleased to introduce you to Blake Fiegert who is playing the role of Jackie. Jackie is best friends with Austin Trent (the main character in our film) and provides a lot of the laughs in Austin’s life.

We asked Blake some questions in order to get a little more inside of who he is and how he prepped for the role of Blake.

Q: What do you find about acting – and especially film acting – that has made you pursue this crazy art – even if this is a first for you?
A: I have always been a story teller and, as an artist, I love working on films as I get to be a part of creating a story. I live for moments of truth and I find that every character I play teaches me something new about myself and the world.

Q: When presented with a character to play, obviously you have never encountered this specific character that only now exists in the script you have been given. How do you bring the character to life and create a believable person from nothing?
A: My character work begins with reading the script a lot! I look for clues as to who this character is. I also find the elements of the character that move me, the process is very guttural- as I read over it I listen to my body and pick up on which words and phrases I connect with. Slowly as I work with the character, I weave in choices regarding costume, accent, pitch, hair etc., then finally I work with the character and the other characters to find relationships and conflicts.

Q: Do you enjoy seeing yourself on the big screen?
A: Seeing myself in films and TV is always nerve racking. I am thinking “did I give justice to the character”.

Q: Independent films are shot very quickly and sometimes things you wish you could have (more rehearsal time, your own dressing room with a star on it, more input on the set, etc.) are not an option. What do you wish you could have had in this film? And what keeps you doing independent films?
A: Independent films are unique and have there own feel about them. I love the way it feels like a school excursion and all your friends are trying to pull something together- it’s a rush!

Q: When playing a character, some actors create a whole back story in order to give them a full life. Tell us something about your character that is NOT in the script that made you feel more in touch with them on a personal level.
A: Working on the character of Jackie was a fun journey. I made a choice that Jackie had two personality traits. He presented an “out there” flamboyant personality among strangers and had a grounded vulnerability among those he trusts.

Q: After auditioning, how did you feel when you heard you got the part?
A: I was ecstatic when I heard the news I was cast! It was my first American Feature!

Q: Family and friends will see the film because you are in it. What is it about the story of the film that would motivate you to tell others they “must” see it?
A: My Brother’s Shoes is a story of family acceptance. I believe in every family there are moments when we must learn to love one another as we grow and change.

Blake Fiegert is an Actor who grew up in country Victoria in Australia. He found his growth while attending Stella Adler in 2012 while he was there full time on Scholarship. Australia has been a great platform for Blake to be a part of TV and Theatre Shows. However, this year Blake is aiming to build the foundations of his film career. His support team is growing and includes the wonderful Pure Talent Management.

Blake has been involved with several projects since arriving in February 2014, and can not wait for what the universe has in store for him later this year. He is excited to be apart of “My Brother’s Shoes” and believes that the role of Jackie will be an excellent challenge. He fell in Love with Jackie’s complex nature. Blake is thankful for this wonderful opportunity.