We are Featured in this month’s Diablo Magazine!! 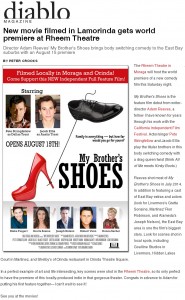 We are pleased to have another publication feature our upcoming Premiere. This is from Peter Crook of Diablo Magazine.

The Rheem Theatre in Moraga will host the world premiere of a new comedy film this Saturday night.

My Brother’s Shoes is the feature film debut from writer-director Adam Reeves, a fellow I have known for years through his work with the California Independent Film Festival. Actor/singer Pete Stringfellow and Jacob Ellis play the titular brothers in this body switching comedy with a drag queen twist (think All of Me meets Kinky Boots.)

Reeves shot most of My Brother’s Shoes in July 2014. In addition to featuring a cast of East Bay extras and actors (look for Livermore’s Gretta Sonsine, Martinez’ Ron Robinson, and Alameda’s Joseph Nelson), the East Bay area is one the film’s biggest stars. Look for scenes shot in local spots, including Goalline Studios in Livermore, Hidden Lakes Court in Martinez, and Shelby’s of Orinda restaurant in Orinda Theatre Square.

In a perfect example of art and life intersecting, key scenes were shot in the Rheem Theatre, so its only perfect to have the premiere of this locally-produced indie in that gorgeous theater. Congrats in advance to Adam for putting his first feature together—I can’t wait to see it!

See you at the movies!