It is only 15 DAYS until the next showing of the remastered version of “My Brother’s Shoes” at the Castro Theatre in San Francisco on Sept. 12th at 3:00pm. 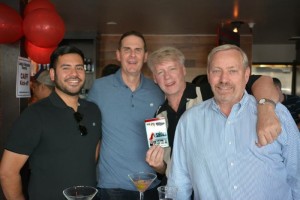 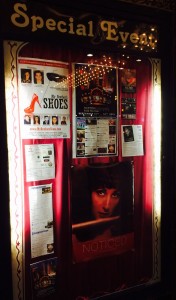 Last night I got invited to attend a promotional party for the CA Indie Festival featuring our film! There was food, drinks, fun people, and great conversations. Our trailer was playing on all the monitors. More tickets were sold. I was asked to talk about the film and how it came about. After only two Cosmopolitans, I think my speech came out pretty well.

We got to meet Jay Anderson who is sponsoring our film for the Festival. Each film has a financial sponsor and Jay is ours. He is not only sponsoring it, but selling tickets and getting the word out to his wide circle of friends in the Bay Area. The theatre holds about 1,800 seats and we want to FILL THEM ALL!! Who-hoo!

Thanks to Derek Zemrak for the invite and introducing me around to everyone. And thanks to a sleepy Ron Robinson who braved staying up so late!!

Get your tickets NOW at www.MyBrothersShoes.com and click on the button on the right. And DVD’s are on pre-order. We will be creating Blu-Ray so the film on DVD will look awesome!