This Just In! Small write up about our movie in CC Times / Livermore Edition 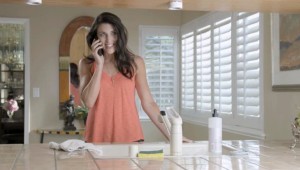 Katelyn checks on Dallas for dinner.

There is a small article about My Brother’s Shoes in the Contra Costa Times Livermore Edition. Our leading lady, Gretta Sosine, is based in Livermore and the paper likes doing articles on what is happening in their demographic area.

Here is the write up:

The film begs one question — how far are you willing to go for your family? When Dallas Trent, who wants to live a safe, conservative life, swaps places with his younger, gay brother Austin, who is vying to win a drag contest, hilarity ensues.

Livermore local Gretta Sosine — who appeared in NBC’s drama “Trauma” — was cast in the production as Katelyn Trent, Dallas’ wife. Other Livermore and Pleasanton residents participated as crew members.

“Katelyn is kind, compassionate and sophisticated but also not afraid to go after what she wants,” Sosine said. “She is a very important connecting piece to the story, and I loved getting play her!”

“My Brother’s Shoes” was filmed in Northern California, including scenes at Goalline Studios in Livermore. The film is set to premiere Aug. 15 in Moraga. For more information, visit mybrothersshoes.com.

If You Go What: Premiere of film “My Brother’s Shoes” with Livermore resident Gretta Sosine
When: 7 p.m. Aug. 15
Where: The Rheem Theatre, 350 Park St. in Moraga
Cost: $15 per ticket