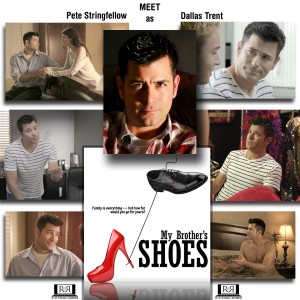 We are pleased to introduce you to Pete Stringfellow who is playing the role of Dallas Trent. Dallas is the older brother of Austin Trent, who has a successful career, beautiful wife, and plans on starting a family.

We asked Pete some questions in order to get a little more inside of who he is and how he prepped for the role of Dallas Trent.

Q: What do you find about acting – and especially film acting – that has made you pursue this crazy art – even if this is a first for you?
A: To put it in simple terms, what keeps me acting is that I have a blast doing it. Making films has always been a really fun and enjoyable experience for me. Like anything else, it can be a ton of work and exhausting at times, but I love it.

Q: When presented with a character to play, obviously you have never encountered this specific character that only now exists in the script you have been given. How do you bring the character to life and create a believable person from nothing?
A: For one, I generally grill the director for information and if I’m lucky enough, I speak with the writers. For this film, I was fortunate enough to meet with Adam Reeves who was the writer and the director for the film. He even came to my recording studio where we got into each scene prior to filming. He had a very clear vision, which I really appreciated. Another thing I do is research, as well as talk with people in the real world to gain perspective. Building a foundation for my character’s motivations is key for me when delivering the lines the day of filming.

Q: Do you enjoy seeing yourself on the big screen?
A:  I do, but you can drive yourself crazy with criticizing your performances. It’s fun to see how the film is put together with editing and music. At times, it can be extremely surreal.

Q: Independent films are shot very quickly and sometimes things you wish you could have (more rehearsal time, your own dressing room with a star on it, more input on the set, etc.) are not an option. What do you wish you could have had in this film? And what keeps you doing independent films?
A:There was a scene that was cut from the movie that I wish we shot. It was fun dialogue between my character Dallas, and his wife Katelyn, played by Gretta Sosine. It made me laugh every time I read the script and when I heard they cut that scene, I was upset.

Q: When playing a character, some actors create a whole back story in order to give them a full life. Tell us something about your character that is NOT in the script that made you feel more in touch with them on a personal level.
A: The film doesn’t say it, but I think Dallas and Austin grew up taking care of each other. I almost see Dallas as a father figure to his little brother, looking out for him throughout his childhood. I bet he even beat up anyone who messed with him at school.

Q: After auditioning, how did you feel when you heard you got the part?
A: I actually had auditioned for a different movie Adam was writing and directing a while back. I didn’t get the part, but when this movie became a reality Adam called and wanted me to meet with him about the part. When I was the final choice to play Dallas, I was stoked as well as honored to have a lead part in a feature film.

Q: Family and friends will see the film because you are in it. What is it about the story of the film that would motivate you to tell others they “must” see it?
A: It’s a story about family, and will make you think. Also, my friends and family will see me do things in this film they’ve never seen me do. You’re going to just have to see the film to know what it is I’m talking about.

Q: Any final comments or thoughts?
A: I had a wonderful experience playing the part of Dallas Trent! All of the folks who made this film possible, were a pleasure to work with. I want to thank Adam for casting me in the part, it was a privilege!

Pete Stringfellow plays the part of Dallas Trent. Pete’s acting experience ranges in movies, television and internet shows. He recently co-starred in an episode of the hit TV Show “Nashville” on ABC, and can be seen in the award-winning movie “NEW”. He’s currently acting in a film that’s in production entitled “For What It’s Worth”. Pete shares his time between Santa Rosa, CA and Nashville, TN and has been a professional entertainer for over 15 years as an actor and country singer.

He explains, “This was definitely a challenging role for me, but I really enjoyed bringing Dallas to life. I was wanting to work with writer/director Adam Reeves for a couple years now, so I was stoked that I finally got to. He’s written an amazing comedy that will make you think. I am honored to be a part of it.”