We are pleased to introduce you to Robert Vann who is playing the role of Mitch. Mitch is a junior partner at the office where Dallas Trent (the main character in our film) works.

We asked Robert some questions in order to get a little more inside of who he is and how he prepped for the role of Mitch.

Q: What do you find about acting – and especially film acting – that has made you pursue this crazy art – even if this is a first for you?
A: I honestly had no plans to pursue film. I am grateful for your asking me to participate in this project and it was a wonderful education for me. As one who had worked exclusively as a stage singer/actor before My Brother’s Shoes, this project pushed me out of my comfort zone in several ways. One notable example is when you deliver a stage performance, you start at the beginning and deliver the narrative in the same order that the audience experiences it. When I arrived on set, I found it fascinating that we would not only film scenes out of sequence, but film a scene, and come back to that scene from a different camera perspective later on in the filming process. Also, when you perform a stage work you are constantly revising and tweaking your interpretation of a part. When filming a movie there is no revising and you better make sure that your choices are consistent with your other scenes. Of course, these are all obvious to one who has worked on film before, but for me it was quite an education.

END_OF_DOCUMENT_TOKEN_TO_BE_REPLACED

Have you seen our Trailer for My Brother’s Shoes?? 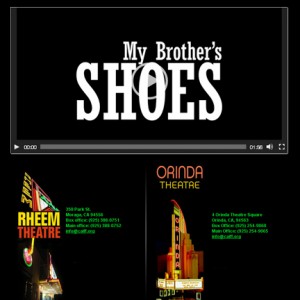 Have you seen our trailer for My Brother’s Shoes?? Well, now it is playing at The Orinda Theatre Square and The The New Rheem Theatre before each movie begins! Awesome!
Here is a link to the trailer in case you have been living under a rock and missed it!! The trailer has now had over 700 views on Facebook and climbing. Thanks to all of you. It takes “a village” to make a successful movie!
Link To Trailer

We Made The Papers!! My Brother’s Shoes in the News! 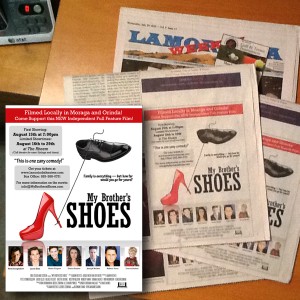 Pick up this week’s Lamorinda Weekly. We have an ad running in the paper for the film My Brother’s Shoes!!

The paper gave us a great placement. We are right on the front cover of the second section.

Thanks goes out to Andy Scheck and Wendy Wuerth-Scheck for the great position in the paper. Love it!